The Mahindra Thar is one of the bestselling vehicles among other Mahindra cars.

The ongoing is the second-generation Thar that is feature-loaded in its segment and gets a 4×4 drivetrain as standard.

Besides that, as for pricing, the Mahindra Thar locks horns with the Hyundai Creta, Kia Seltos, MG Hector, Volkswagen Taigun and the Skoda Kushaq, to name a few.

However, since this blog is on the Mahindra Thar vs Force Gurkha, let’s see how they stack up against each other on paper. Let’s begin!

On the safety front, it gets brake assist, anti-theft alarm, dual airbags, anti-glare IRVM, seat-belt warning, crash sensor, ESP, and so on. Most of these offerings aren’t there in the Force Gurkha. There are only three or four common features in the Force’s off-roader. However, the Force Gurkha does lack several basic new-age features at its price point. Only the infotainment system is the same as the Mahindra Thar. The only difference in the Gurkha’s infotainment unit is that it supports Android Auto and Apple CarPlay, while the Thar’s doesn’t. The Force Gurkha is for those who aren’t feature-oriented and like to have an old-school feel. On the other hand, the Mahindra Thar also has an old-school feel, but it still offers new-age features so that no customer can feel a lack of anything. 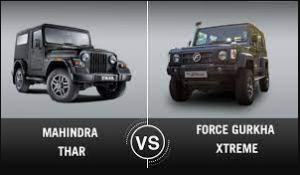 However, apart from features, if you want to know about the inside-the-cabin experience, check out the Mahindra Thar review.

The Mahindra Thar is the only offering available with petrol and diesel engine options. And the Force Gurkha is solely available with a diesel engine. Customers owning the Force Gurkha with a Delhi NCR registered number plate could face issues with keeping the car after ten years and in resale. Customers who own the Mahindra Thar Petrol can keep the car for more than ten years with the Delhi NCR registered number plate.

However, as for the Mahindra Thar specifications, it gets two turbocharged engine options. The 2.0-litre four-cylinder turbocharged petrol engine generates 150bhp and 300Nm of torque. The automatic variant will get a higher torque of up to 320Nm.

The 2.2-litre turbo-diesel engine, on the other hand, produces 130bhp and 300Nm of torque. In the diesel engine, torque won’t vary, unlike in the petrol engine. However, at the same time, the Thar has a 4×4 drivetrain as standard.

Customers can also expect a better ride quality than the Force Gurkha, as it boasts damped suspension and a stabiliser bar at the front and rear. The Gurkha gets a standard suspension setup, unlike the Thar car.

On the contrary, the Force Gurkha gets a 2.6-litre diesel engine that churns out 91bhp and 250Nm of torque. With that engine, customers will get a five-speed manual transmission. The Gurkha also gets a 4×4 drivetrain as standard.

Here again, the Mahindra Thar secures another brownie point for having a better power delivery than the Force Gurkha.

The Mahindra Thar has two trims: AX(O) and LX. Furthermore, the Mahindra Thar variants sum up to ten options. The off-roader comes with a factory-fitted hard-top and a convertible top option. In addition, it also gets removable doors for hardcore off-roading.

The Force Gurkha has only one variant available.

Decreased Sexual Desire: What You Should Know